All parties agree: Education without Christianity is “repugnant”

All parties agree:  Education without Christianity is “repugnant”–so says the Supreme Court!  Rather surprising wouldn’t you say?  The notion that Christianity, actively teaching and promoting Biblical principles, would be allowed within a government-run school is ridiculous, right?  “That’s not constitutional!” … “It’s a violation of the separation of Church and State!”  Think again!  We may have that completely wrong.

In 1844, a very unique case reached the U.S. Supreme Court involving the estate of Frenchman Stephen Girard ( Vidal v. Girard’s Executors ). He had arrived in America before the Declaration of Independence, where he settled in Philadelphia and lived there until his death in 1831.  He bequeathed his estate (valued at over seven million dollars) to the city, with the condition that it construct for orphans between the ages of six and eighteen a “college” to be named after him, in which he specifically stipulated:

“I enjoin and require that no ecclesiastic, missionary, or minister of any sect

[denomination] whatsoever, shall ever hold or exercise any station or duty whatever in the said college—nor shall any such person ever be admitted for any purpose, or as a visitor within the premises.”

Girard’s heirs, seeking to keep his estate in their hands, filed suit against the will and secured the great Daniel Webster, the “Defender of the Constitution,” as their lawyer. Webster was considered the greatest attorney in his generation and personally argued and won numerous cases before the U.S. Supreme Court. In fact, it is reported that opposing attorneys, when learning they would be facing Webster, would sometimes withdraw from a case rather than face his genius.

The requirement to exclude clergy and religious teachings from a school to be established under the government’s authority was unprecedented; and when Webster addressed the Supreme Court, what from others might have been nothing more than a dry legal argument, from his lips became an emotional appeal on the importance of preserving religious instruction at the school.

Daniel Webster’s Legal Argument, a Stirring Emotional Appeal for the Importance of Religious Instruction in School

His argument before the court lasted three days, throughout which time he repeatedly attacked the school for its anti-Christian posture, telling the court: 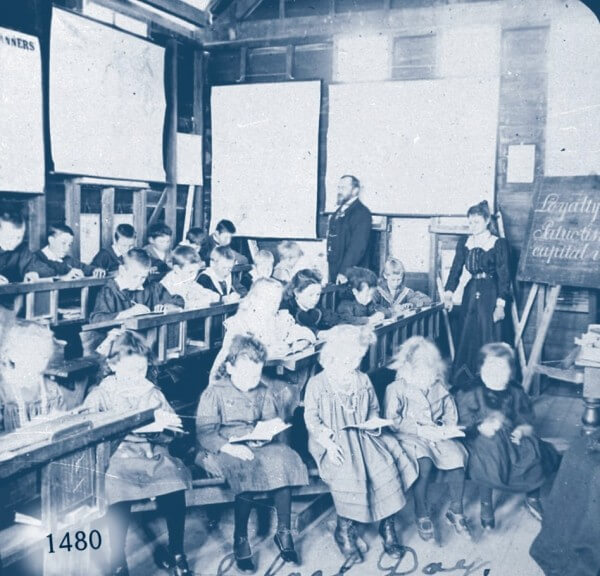 “The plan of education proposed by Mr. Girard is derogatory to the Christian religion, tends to weaken men’s reverence for that religion and their conviction of its authority and importance, and therefore in its general character tends to mischievous and not to useful ends. The proposed school is to be founded on plain and clear principles, and for plain and clear objects of infidelity. . . . When little children were brought into the presence of the Son of God, His disciples proposed to send them away, but He said, “Suffer little children to come unto Me” [Mt.19:14] “Unto Me!” . . . He opened at once to the youthful mind the everlasting fountain of living waters—the only source of eternal truths: “Suffer little children to come unto Me.” And that injunction is of perpetual obligation. It addresses itself today with the same earnestness and the same authority which attended its first utterance to the Christian world. It is of force everywhere and at all times. It extends to the ends of the earth; it will reach to the end of time, always and everywhere sounding in the ears of men with an emphasis which no repetition can weaken and with an authority which nothing can supersede: “Suffer little children to come unto Me.” . . . I blame not Mr. Girard because he desired to raise a splendid marble palace. . . . But his school of learning is not to be valued because it has not the chastening influences of true religion—because it has no fragrance of the spirit of Christianity.”

Webster opposed any plan of education that forbade children to “come unto Him” at school. Significantly, the city’s attorneys agreed that religion must be taught at the school, telling the court:

“The purest principles of morality are to be taught. Where are they found? Whoever searches for them must go to the source from which a Christian man derives his faith—the Bible. . . . There is an obligation to teach [in the school] what the Bible alone can teach, viz. a pure system of morality.”

After the arguments were finished, the unanimous opinion of the Supreme Court was delivered by Justice Joseph Story, a “Father of American Jurisprudence” who had been placed on the court by President James Madison. The court ruled that Christianity could not be excluded from the school:

“Christianity . . . is not to be maliciously and openly reviled and blasphemed against to the annoyance of believers or the injury of the public. . . . It is unnecessary for us, however, to consider . . . the establishment of a school or college for the propagation of . . . Deism or any other form of infidelity.  Such a case is not to be presumed to exist in a Christian country.”

The court then pointed out that even though the will had prohibited clergy, it had not explicitly prohibited Christian instruction and was therefore constitutionally acceptable. As the court explained:

“Why may not laymen instruct in the general principles of Christianity as well as ecclesiastics [the clergy]. . . . And we cannot overlook the blessings which such [lay]men by their conduct as well as their instructions may—nay, must impart to their youthful pupils. Why may not the Bible, and especially the New Testament without note or comment, be read and taught as a Divine revelation in the college—its general precepts expounded, its evidences explained and its glorious principles of morality inculcated? . . . Where can the purest principles of morality be learned so clearly or so perfectly as from the New Testament? Where are benevolence, the love of truth, sobriety, and industry so powerfully and irresistibly inculcated as in the Sacred Volume?”

Many legal controversies had marked the case, but on the issue of Christian teachings in this government-run school, all parties had agreed: the plaintiff’s lawyers had said that education without Christianity was “repugnant”; the city’s lawyers had declared it “obnoxious”; and the Supreme Court said that it couldn’t be permitted—that Biblical and Christian principles must be taught in schools.

There’s Not Much that Makes Jesus Angry and Outraged, but This Does!

Webster had based his argument on Jesus’ declaration in Mt.19:14 to “Suffer little children . . . to come unto Me” (he was quoting from the King James Version). Modern versions translate this phrase as “Do not hinder them from coming to Me” (Mt.19:14) or “Permit the children to come to Me” (Lk.18:16), but Mk.10:14 adds another element, with the Scripture recording: “When Jesus saw this [the children being stopped from coming to Him], He was indignant and said to them, ‘Permit the children to come to Me; do not hinder them.’ ” Notice that at attempts to prevent children from coming to Him, Jesus was “indignant”—that is, by definition, He was angry and outraged.

With so much of our American education today deliberately and even stridently working to keep God out of the public school system, the misguided efforts to produce a religiously neutral environment actually impose a godless one.  As opposed to promoting freedom allowing for inquiry and guidance, their religious intolerance prevents children from coming to Him at school. But in previous generations, the U.S. Supreme Court delivered a unanimous ruling in the opposite direction, thus preserving the Bible and Christian principles as an integral part of a sound American education. Permit the children to come.

[ This article, entitled “Do Not Hinder Them” pp.1479-1482 is taken from © The Founder’s Bible and reprinted by permission of Shiloh Road Publishers, LLC   For more information, go to www.thefoundersbible.com ]

Privacy Center
Accept
PLEASE NOTE: Shipping may take longer than normal due to high demand. Thank you for your patience!
Learn more
This is default text for notification bar
Learn more