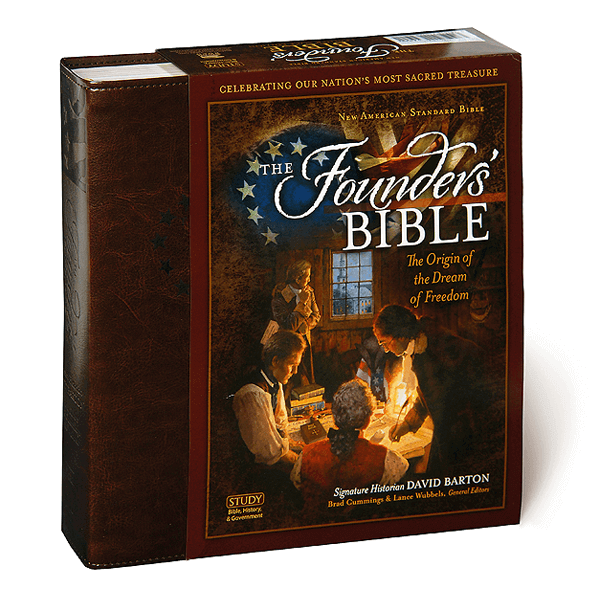 While The Founders’ Bible Leather-Soft edition is synthetic leather, the deep, rich Chestnut brown binding has all the look and feel of its genuine leather counterpart. It’s nearly as durable, but easier on a family’s budget. With beautiful rounded corners, distinctive, hand-crafted perimeter stitching, and a wonderfully textured, burnished imprint on the cover and spine, the Leather-Soft edition is a little more casual in appearance without the more formal gold gilding, but you will be captivated by how marvelous it feels. This Bible is a treasure to hold. Each copy comes individually shrink-wrapped in an exceptional O-band that captures the beauty of the commissioned cover artwork.

Additional elements:
Our Founding Documents—32 beautifully designed and illustrated two-color pages, including:
The Declaration of Independence
The Constitution of the United States
The Bill of Rights and later amendments

● 2312 pages beautifully designed and illustrated throughout in both 2-color and magnificent 4-color pages.
● Over 1000 pages of in-depth culturally relevant articles, insightful biblical commentary and some of the most inspiring history of this nation’s founding and the destiny and purpose God intended, covering themes like: “Our Most Sacred Treasure: The Bible”, “Is America a Christian Nation?”, “Original Intent and the Separation of Church and State” and “Escape from Tyranny”.
● Trusted, Updated New American Standard Bible (NASB) Reference Edition—recognized by scholars as the most accurate word for word translation of the Scriptures into the English language.
● Original artwork from master illustrator and oil painter C. Michael Dudash throughout the Bible as well as hundreds of historical paintings and sketches.
● Hundreds of pages of unique embedded commentary highlighting biblical insight and wisdom from the Founders on a wide range of topics such as: Caring for the Poor, Abortion, Homosexuality, Marriage, Taxation, Education, Business and Economics…touching on virtually every area of life.
● Examines the specific verses and chapters of the Bible that inspired our understanding of God-given rights, freedom and justice, our legal system as it was intended to function, and the source of so many of the ideas found in our guiding documents and constitutional republic form of government.
● Over 150 biographies or insightful quotes from various Founders and other influential people of history and the Founding Era
● An American Timeline of History, The Presidents of the U.S., and Colonial Maps.
● 66 inspirational Bible book introductions, key verses, outlines that reveal the grand story of Scripture and God’s desire for a walking, talking relationship with each one of us.
● Subject index, Concordance, Center column Cross-reference Study Edition, and Bible maps.

America stands at the crossroads of human history, teetering on the brink of disaster. If ever there was a desperate need for us to rediscover the vision, passion, and wisdom of our Founding Fathers, it is now! Signature historian David Barton sets the record straight, unveiling the true and forgotten history of America’s founding and the unwavering commitment our Founders had to the importance of the Word of God. The Bible was central to their lives as individuals, essential for shaping and guiding our society, and foundational to our unique system of government that has produced the most enduring legacy of freedom any nation has ever known. The Founders’ Bible uses the trusted, updated New American Standard Bible (NASB), recognized by scholars as the most accurate, word for word translation of the Scriptures in the English language. With over 1000 pages of in-depth culturally relevant articles, insightful Biblical commentary from the Founders on a wide range of topics, and some of the most inspiring history of this nation’s founding and the destiny and purpose God intended. The Founders’ Bible will renew your hope and reignite your passion not only for America, but also for the Word of God. It could be likened to a modern day ‘Geneva Bible’ for this generation in terms of its scope, content and significance. No other book brings together your history, your government and your Bible all into one amazing resource. The Founders’ Bible is destined to be an unrivaled, invaluable textbook for university students, home-schoolers, and all those who want to learn the true and forgotten foundations of what has made America great. 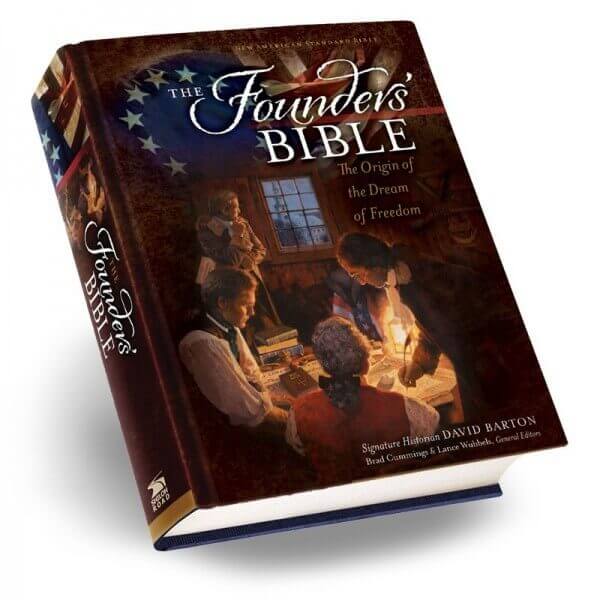 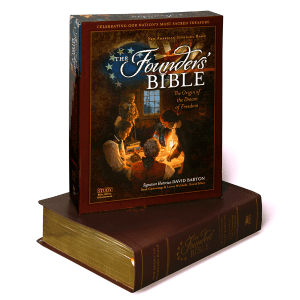 Privacy Center
Accept
The Hardcover Edition is now back in stock! In appreciation of our customers we also continuing our 25% discount of the Genuine Leather Edition through the Lenten and Easter seasons!
Learn more
This is default text for notification bar
Learn more